Letters of Credit can be considered as an important payment method in international trade for various reasons. As an example, they cannot only reduce the risks of the parties of the transaction to acceptable limits, but also they have a flexible structure, which makes them suitable for applying to different scenarios successfully.

Transferable letter of credit is a sort of a documentary credit which can be used in situations where middlemen are playing a certain role. Usually middlemen (first beneficiary) do not have enough capital establishment to buy the goods from their sources (second beneficiary) before they re-sell them to their final customers (applicant). If the final buyer finds it valuable working with an intermediary for a definite foreign trade transaction, he can let the intermediary benefit from his credibility by supplying him a transferable letter of credit.

Transferable letters of credit should be issued in an irrevocable form.

A bank is not obligated to transfer a credit. 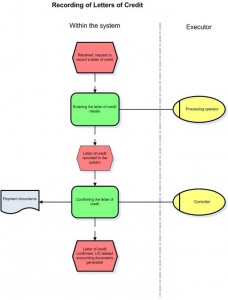 A transferable letter of credit can be transferred to more than one second beneficiary as long as credit allows partial shipments.

The terms and conditions of the original credit must be indicated exactly in the transferred credit. However, in order to keep the workability of the transferable letter of credit below figures can be reduced or curtailed.