Seed money, sometimes known as Seed Funding, Friends and Family Funding or Angel Funding (and some times also as venture capital), is a securities offering whereby one or more parties that have some connection to a new enterprise invest the funds necessary to start the business so that it has enough funds to sustain itself for a period of development until it reaches either a state where it is able to continue funding itself, or has created something in value so that it is worthy of future rounds of funding. Seed money refers to the money invested. New seed money options are also emerging from crowd funding. 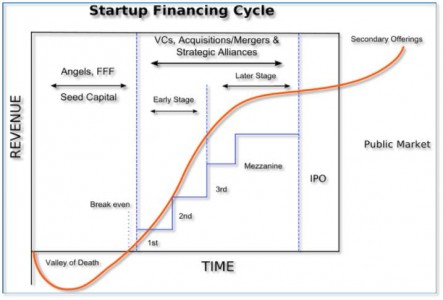 Seed money is typically used to pay for such preliminary operations as market research and product development. Investors are often the business founders themselves, using savings, mortgage loan proceeds, or funds borrowed from family and friends. They may also be outside angel investors, venture capitalists or accredited investors who are acquainted in some way with the founders. Seed capital is not necessarily a large amount of money. Many people start up new business ventures with $50,000 or less.

Seed money may also come from crowd funding or from financial bootstrapping rather than an offering. Bootstrapping in this context means making use of the cash flow of an existing enterprise.

Investors make their decision whether to fund a project based on the perceived strength of the idea and the capabilities, skills and past history of the founders.

Sources; Wikipedia and other encyclopedias