Person-to-Person lending (also known as Peer-to-Peer Lending, peer-to-peer investing, and social lending; abbreviated frequently as P2P Lending) is a certain breed of financial transaction (primarily lending and borrowing, though other more complicated transactions can be facilitated) which occurs directly between individuals or “peers” without the intermediation of a traditional financial institution. Person-to-person lending is for the most part a for-profit activity, this distinguishes it from person-to-person charities, person-to-person philanthropy and crowdfunding which also create connections between donors and recipients of donations but are nonprofit movements.

Lending money and supplies to friends, family and community members predates formalized financial institutions, but in its modern form, peer-to-peer lending is a by-product of internet technologies, especially Web 2.0. The development of the market niche was further boosted by the global economical crisis in 2007-2010 when person-to-person lending platforms promised to provide credit at the time when banks and other traditional financial institutions were having fiscal difficulties. 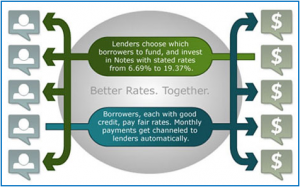 In 2005, there were $118 million of outstanding peer-to-peer loans. In 2006, there were $269 million, and, in 2007, a total of $647 million. The projected amount for 2010 is $5.8 billion.
Reasons for peer-from-peer borrowing range from education  and mortgage loans,  and business funding to vet bills and weddings, the most popular loan being debt consolidation.

The main characteristics of Person-to-Person lending are Disintermediation and reliance of existing social networks.

Disintermediation is a term that denotes the removal of intermediaries in a supply chain, and in the present context, the absence of traditional financial institutions as intermediaries between individuals (“peers”); an important impetus for this is a drop in the cost of servicing customers. The enabling technology for disintermediation has been the Internet that gave rise to several new crowdsourcing-based business models, such as employment portals (connect employees and employers), auction portals (connect buyers and sellers), and peer-to-peer lending platforms (connect borrowers and lenders).

Many Peer-to-Peer Lending companies leverage existing communities and pre-existing interpersonal relationships with the idea that borrowers are less likely to default to the members of their own communities. The risk associated with lending is minimized either through mutual (community) support of the borrower or, as occurs in some instances, through forms of social pressure. The peer-to-peer lending firms either act as middlemen between friends and family to assist with calculating repayment terms, or connect anonymous borrowers and lenders based on similarities in their geographic location, educational and professional background, and connectedness within a given social network.

Various models and variations of Person-to-Person Lending services have evolved based on different combinations of the following main parameter settings:

Direct vs. Indirect Lending
Direct Lending
In this model, the lender lends money to one specific borrower based on his/her credit rating; the risk of capital and interest for the lender is that the borrower could default on the loan. Lenders have mitigated this risk by investing small amounts into a large number of loans so that only a small amount of money is loaned to any one person. See also direct loans.

Indirect Lending
In this model (also known as ‘pooled lending’), the lender lends the money to several borrowers with similar credit ratings; the risk of capital and interest for the lender is defaulters in the pool. The risk of capital and interest of the lender is reduced considerably because the impact of any one default is made trivial in light of the timely payment of the vast majority of the notes outstanding; both many-to-one or one-to-many credit structures may be involved. This model is very similar to the traditional bank model and does not allow the lenders to select individual borrowers. See also pooled investment.

In this model, the lender gives money to the borrower against the strength of the collateral given by the borrower. For loans that are originated in the United States it is common to file a UCC-1 form. Each state has a different form. See also asset-based lending.

Unsecured Lending
In this model, the lender gives money to the borrower based on the credit rating of the borrower. The lender runs the risk of the capital and interest in case of failure on the part of the borrower. Two variants have evolved in this space. See also unsecured loans.

In this model (also known as ‘marketplace lending’), the lenders and borrowers are previously unacquainted or do not have a prior personal loan agreement. The system enables individual lenders to locate individual borrowers and vice-versa and connects them through an auction-like process in which the lender willing to provide the lowest interest rate “wins” the borrower’s loan. The marketplace process may include other intermediaries who package and resell the loans, but the loans are ultimately sold to individuals or pools of individuals.

Familiar Lenders and Borrowers
In this model (also known as ‘family and friend lending’), the lender lends money to a borrower based on their pre-existing personal, family, or business relationship. The model forgoes an auction-like process and concentrates on formalizing and servicing a personal loan. Lenders can charge below market rates to assist the borrower and mitigate risk. Loans can be made to buy homes, personal needs, school, travel or any other needs. 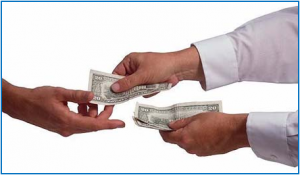 A special case of this model is community lending in microfinance where a loan is made to a specific individual but the lending agreement is structured to hold the borrower’s social group either directly accountable for the repayment of the loan (akin to “cosigning”) or indirectly accountable, whereby the entire social group may face future consequences, such as reduced access to credit or higher future rates, if one of its members fails to repay an obligation.

Loan Servicing
The services offered include formalizing loans by creating written documents, establishing payment schedules, ensuring timely payments and collecting funds from one party and transferring them to another. See also loan servicing.

In most countries, soliciting investments from the general public is considered illegal and crowd sourcing arrangements in which people are asked to contribute money in exchange for potential profits based on the work of others are considered a security.
Dealing with financial securities is connected to the problem about ownership — in case of person-to-person loans, who owns the loans (notes) and how that ownership is transferred between the originator of the loan (the person-to-person lending company) and the individual lender(s). This question arises especially when a peer-to-peer lending company does not just connect lenders and borrowers but borrows money from users and then lends it out again. Such activity is interpreted as a sale of securities and a broker-dealer license and the registration of the person-to-person investment contract is required for the process to be legal. The license and registration can be obtained at a securities regulatory agency such as the Securities and Exchange Commission in the U.S., the Ontario Securities Commission in Ontario, Canada, the Autorité des marchés financiers in France and Quebec, Canada, or the Financial Services Authority in the U.K.

One of the main advantages of person-to-person lending for borrowers has been better rates than traditional bank rates can offer (often below 10%).  The advantages for lenders are higher returns than obtainable from a savings account or other investments.  Both of these benefits are the result of disintermediation, the lack of high overheads to traditional financial institutions with many employees and costly locations. The paucity of administrative procedures in person-to-person lending has the additional benefit that loan application and the transfer of funds takes less time and both borrowers and lenders can access their money faster.
As person-to-person lending companies and their customer base continue to grow, though, marketing expenses and administrative costs associated with customer service and arbitration, maintaining product information, and developing quality websites to service customers and stand out among competitors will rise, and compliance to legal regulations becomes more complicated. This causes many of the original benefits from disintermediation to fade away and turns person-to-person companies into new intermediaries, much like the banks that they originally differentiated from. Such process of re-introduction of intermediaries is known as reintermediation.
Person-to-person lending also attracts borrowers who, because of their past credit status or the lack of thereof, are unqualified for traditional bank loans. The unfortunate situation of these borrowers is, however, well known for the people issuing the loans and results in very high interest rates that verges on predatory lending and loan sharking.
At the same time, because past behavior is frequently indicative of future performance and low credit scores correlate with high likelihood of defaulting, many person-to-person intermediaries have begun to decline borrowers whose credit scores are below a certain bound.
It seemed initially that one of the appealing characteristics of person-to-person lending for investors was low default rates, e.g. Prosper’s default rate was quoted to be only at about 2.7 percent in 2007.
The actual default rates for the loans originated on Prosper in 2007 were in fact higher than projected. As loss of principal is dependent upon when in the repayment cycle a particular loan defaults, it is more appropriate to speak of aggregate yield – rather than merely “default rate” – as a loan which “defaults” after making, say, 30 (out of 36) of its payments will impact return differently than a loan which defaults after making only a few payments.