Knights Templar and the Norwegian Terrorist!

Following the trial it is kind of peculiar listening to the psychiatrists and their opinion. According to them Knights Templar is hardly none existing or even most likely on of the Terrorists fantasies.

Based on the fact that this was a medieval order and also is a highly existing order today in a more modern form should have been taken into consideration. Dan Brown in many ways made the awareness again in his famous world bestseller; “The Da Vinci Code”.

“The Grand Commandery of Knights Templar is a chivalric association of like-minded individuals who demonstrate seven core principles: Chivalry, honour, integrity, humility, courtesy, wisdom & charity. Members take their inspiration from the highest ideals of the medieval Order of Knights Templar, originally founded by Hugues de Payens and eight fellow noblemen in Jerusalem circa 1118. These core principles have strong correlations to the Latin Rule of Templars, adopted by Hugues de Payens and others under the guidance of St Bernard of Clairvaux and Council of Troyes on 13th January 1129. It is expected that members commit themselves to these core principles which the Order recognises as being based on similar Christian principles.” Taken from the orders home page;
http://www.knightstemplar.gckt.org/upcoming_events.html

“The Poor Fellow-Soldiers of Christ and of the Temple of Solomon (Latin: Pauperes commilitones Christi Templique Solomonici), commonly known as the Knights Templar, the Order of the Temple (French: Ordre du Temple or Templiers) or simply as Templars, were among the most famous of the Western Christian military orders. The organization existed for nearly two centuries during the Middle Ages.

Officially endorsed by the Catholic Church around 1129, the Order became a favored charity throughout Christendom, and grew rapidly in membership and power. Templar knights, in their distinctive white mantles with a red cross, were among the most skilled fighting units of the Crusades. Non-combatant members of the Order managed a large economic infrastructure throughout Christendom, innovating financial techniques that were an early form of banking, and building fortifications across Europe and the Holy Land. 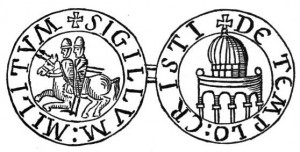 The Templars’ existence was tied closely to the Crusades; when the Holy Land was lost, support for the Order faded. Rumors about the Templars’ secret initiation ceremony created mistrust, and King Philip IV of France, deeply in debt to the Order, took advantage of the situation. In 1307, many of the Order’s members in France were arrested, tortured into giving false confessions, and then burned at the stake. Under pressure from King Philip, Pope Clement V disbanded the Order in 1312. The abrupt disappearance of a major part of the European infrastructure gave rise to speculation and legends, which have kept the “Templar” name alive into the modern day.”

Finally of course equally important to understand that the existing order never would have allowed the Terrorist to join. They strongly renounce violence and most of his crazy ideas.

Sources; Wikipedia, own publications and other encyclopaedias