Together with scary high unemployment rates in many European countries, especially among young people, the debt levels are more than scaring. It is unbelievable how so called responsible governments (read; Germany, France and the UK) have allowed European debts to raise. This is pure speculation but have they been willing to let other countries increase their debt so they could avoid criticism for doing exactly the same themselves? 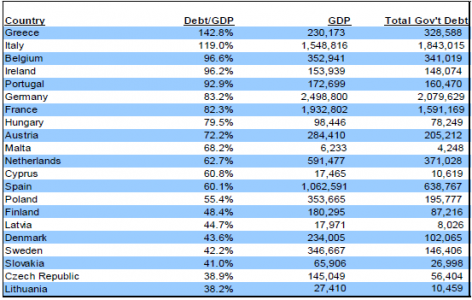 France and Germany are in no way capable of bailing out Spain and Italy. In fact Spain is far better off when it comes to level of debts than the three others, question is if Spain can raise its growth enabling them to maintain the loans. 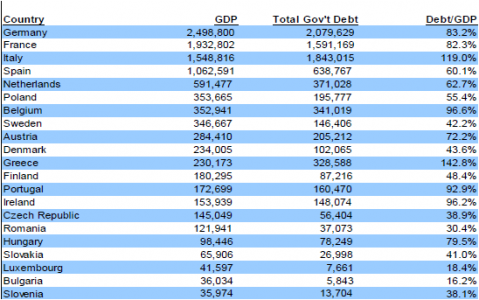 The Problem Is Not Just Europe (All Currency In USD at 1.40 exchange rate)

The US is actually in a no better situation than the countries worst out in Europe. Their advantage may be still able to borrow at reasonable cost, but if bringing in unfunded liabilities (Social Security, Medicare and Medicaid) the US Government is insolvent!

Where will this end?

No one is willing to start taking the losses which must come. The Norwegian government is signalling willingness putting more money into IMF. But how can that help? A couple of decades back we had a saying “Cut Losses and let Profit run”. The way this is handled now is only making one thing certain in those countries worst off – unemployment is growing and GDP is shrinking. Face reality take the losses now, restructure and get things moving in the right direction.