Trading Indices can be a very lucrative business. However like anything else in the world, it is important to know as much as possible about the trade you are in.

For trading we recommend the Plus500 Trading Platform. Go to our Global Trading page and read more about how to register, get tips, do trials and gain experience.

A Stock Market Index is a method of measuring a section of the stock market. Many indices are cited by news or financial services firms and are used as benchmarks, to measure the performance of portfolios such as mutual funds.

Alternatively, an index may also be considered as an instrument (after all it can be traded) which derives its value from other instruments or indices. The index may be weighted to reflect the market capitalization of its components, or may be a simple index which merely represents the net change in the prices of the underlying instruments.

Most publicly quoted stock market indices (like the two quoted below) are weighted.

Stock market indices may be classed in many ways. A ‘world’ or ‘global’ stock market index includes (typically large) companies without regard for where they are domiciled or traded. Two examples are MSCI World and S&P Global 100.

A ‘national’ index represents the performance of the stock market of a given nation—and by proxy, reflects investor sentiment on the state of its economy. The most regularly quoted market indices are national indices composed of the stocks of large companies listed on a nation’s largest stock exchanges, such as the American S&P 500, the Japanese Nikkei 225, the Russian RTSI, the Indian SENSEX and the British FTSE 100.

The concept may be extended well beyond an exchange. The Wilshire 5000 Index, the original total market index, represents the stocks of nearly every publicly traded company in the United States, including all U.S. stocks traded on the New York Stock Exchange (but not ADRs or limited partnerships), NASDAQ and American Stock Exchange. Russell Investment Group added to the family of indices by launching the Russel Global Index.[1]

More specialised indices exist tracking the performance of specific sectors of the market. Some examples include the Wilshire US REIT which tracks more than 80 American real estate investment trusts and the Morgan Stanley Biotech Index which consists of 36 American firms in the biotechnology industry. Other indices may track companies of a certain size, a certain type of management, or even more specialized criteria — one index published by Linux Weekly News tracks stocks of companies that sell products and services based on the Linux operating environment. 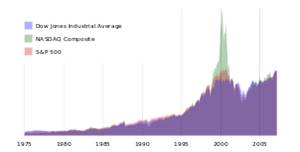 An index may also be classified according to the method used to determine its price. In a price-weighted index such as the Dow Jones Industrial Average, Amex Major Market Index, and the NYSE ARCA Tech 100 Index, the price of each component stock is the only consideration when determining the value of the index. Thus, price movement of even a single security will heavily influence the value of the index even though the dollar shift is less significant in a relatively highly valued issue, and moreover ignoring the relative size of the company as a whole. In contrast, a market-value weighted or capitalization-weighted index such as the Hang Seng Index factors in the size of the company. Thus, a relatively small shift in the price of a large company will heavily influence the value of the index. In a market-share weighted index, price is weighted relative to the number of shares, rather than their total value.

Traditionally, capitalization- or share-weighted indices all had a full weighting, i.e. all outstanding shares were included. Recently, many of them have changed to a float-adjusted weighting which helps indexing.

A modified capitalization-weighted index is a hybrid between capitalization weighting and equal weighting. It is similar to a capitalization weighting with one main difference: the largest stocks are capped to a percent of the weight of the total stock index and the excess weight will be redistributed equally amongst the stocks under that cap. Moreover, in 2005, Standard & Poor’s introduced the S&P Pure Growth Style Index and S&P Pure Value Style Index which was attribute-weighted. That is, a stock’s weight in the index is decided by the score it gets relative to the value attributes that define the criteria of a specific index, the same measure used to select the stocks in the first place. For these two stocks, a score is calculated for every stock, be it their growth score or the value score (a stock cannot be both) and accordingly they are weighted for the index.

There has been an accelerating trend in recent decades to create passively managed mutual funds that are based on market indices, known as index funds. Advocates claim that index funds routinely beat a large majority of actively managed mutual funds; one study[citation needed] claimed that over time, the average actively managed fund has returned 1.8% less than the S&P 500 index – a result nearly equal to the average expense ratio of mutual funds (fund expenses are a drag on the funds’ return by exactly that ratio). Since index funds attempt to replicate the holdings of an index, they obviate the need for — and thus many costs of — the research entailed in active management, and have a lower churn rate (the turnover of securities which lose fund managers’ favor and are sold, with the attendant cost of commissions and capital gains taxes).

Indices are also a common basis for a related type of investment, the exchange-traded fund or ETF. Unlike an index fund, which is priced daily, an ETF is priced continuously, is optionable, and can be sold short.

A notable specialised index type is those for ethical investing indices that include only those companies satisfying ecological or social criteria, e.g. those of The Calvert Group, KLD, FTSE4Good Index, Dow Jones Sustainability Index and Wilderhill Clean Energy Index.

In 2010, the OIC announced the initiation of a stock index that complies with Islamic law‘s ban on alcohol, tobacco and gambling. Other such equities, such as the Dow Jones Islamic Market World Index, already exist.

Another important trend is strict mechanical criteria for inclusion and exclusion to prevent market manipulation, e.g. in Canada when Nortel was permitted to rise to over 30% of the TSE 300 index value. Ethical indices have a particular interest in mechanical criteria, seeking to avoid accusations of ideological bias in selection, and have pioneered techniques for inclusion and exclusion of stocks based on complex criteria. Another means of mechanical selection is mark-to-future methods that exploit scenarios produced by multiple analysts weighted according to probability, to determine which stocks have become too risky to hold in the index of concern.

Critics of such initiatives argue that many firms satisfy mechanical “ethical criteria”, e.g. regarding board composition or hiring practices, but fail to perform ethically with respect to shareholders, e.g. Enron. Indeed, the seeming “seal of approval” of an ethical index may put investors more at ease, enabling scams. One response to these criticisms is that trust in the corporate management, index criteria, fund or index manager, and securities regulator, can never be replaced by mechanical means, so “market transparency” and “disclosure” are the only long-term-effective paths to fair markets.

An environmental stock market index aims to provide a quantitative measure of the environmental damage caused by the companies in an index. Indices of this nature face much of the same criticism as Ethical indices do — that the ‘score’ given is partially subjective.

However, whereas ‘ethical’ issues (for example, does a company use a sweatshop) are largely subjective and difficult to score, an environmental impact is often quantifiable through scientific methods. So it is broadly possible to assign a ‘score’ to (say) the damage caused by a tonne of mercury dumped into a local river. It is harder to develop a scoring method that can compare different types of pollutant — for example does one hundred tonnes of carbon dioxide emitted to the air cause more or less damage (via climate change) than one tonne of mercury dumped in a river (and poisoning all the fish).

Generally, most environmental economists attempting to create an environmental index would attempt to quantify damage in monetary terms. So one tonne of carbon dioxide might cause $100 worth of damage, whereas one tonne of mercury might cause $50,000 (as it is highly toxic). Companies can therefore be given an ‘environmental impact’ score, based on the cost they impose on the environment. Quantification of damage in this nature is extremely difficult, as pollutants tend to be market externalities and so have no easily measurable cost by definition.