A press release, news release, media release, press statement or video release is a written or recorded communication directed at members of the news media for the purpose of announcing something ostensibly newsworthy. Typically, they are mailed, faxed, or e-mailed to assignment editors at newspapers, magazines, radio stations, television stations, and/or television networks. 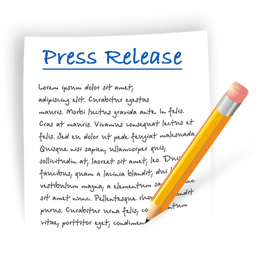 The use of press releases is common in the field of public relations (PR). Typically, the aim is to attract favorable media attention to the PR professionals client and/or provide publicity for products or events marketed by those clients. A press release provides reporters with an information subsidy containing the basics needed to develop a news story. Press releases can announce a range of news items, such as scheduled events, personal promotions, awards, new products and services, sales and other financial data, accomplishments, etc. They are often used in generating a feature story or are sent for the purpose of announcing news conferences, upcoming events or a change in corporation.

A press statement is information supplied to reporters. This is an official announcement or account of a news story that is specially prepared and issued to newspapers and other news media for them to make known to the public.

Press releases have some  standard items used for the receiver to recognise and treat accordingly. Below you will find the content headings the receiver will expect to have outlined in blue. 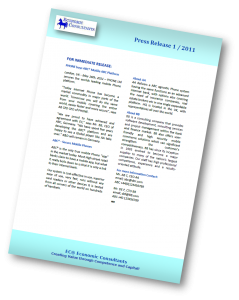 “Today Internet Phone has become a market commodity in major parts of the world. Tomorrow you will do the same from your mobile covering the entire world, easier faster and more secure”, says NN CED of PHONE.

“We are proud to have achieved and agreement with EC,” says Mr. BB, CEO of ABC, Germany. “We have spent five years developing the ABC® platform and are happy to see a Global player like AA take over.” R&D will remain in Germany.

ABC® is the only true mobile Phone “app” in the market today. Most High street retail banks claim to have a mobile app, but what it really boils down to is that it is only a link to their Internet bank.

Our system is cost-effective in use, superior ease of use, very fast, runs without any card readers or other devices It is tested from all corners of the world on hundreds of handsets.

AA delivers an  ABC agnostic Phone system having the same functions as an advanced Internet bank, with options also covering the need of insurance companies, real estate brokers etc in one single expandable platform. HQ is located in the UK, with representatives all over the world.

BB is a consulting company that provides software development, consulting services and project management within the bank and finance market. BB also offers user-friendly and high security mobile commerce solutions which can significant strengthen the customer’s competitiveness. BB has since its inception in 1995 evolved to become a major supplier to many of the nation’s largest companies. Our staff has high professional competence, experience and a results-oriented attitude.