EC strengthen its presence in The Balkan Peninsula.

Samoil started his career in 2007 as a President of the Student parliament at Ss. Cyril and Methodius University in Skopje, Republic of Macedonia and as Chairperson of National Student Union of Macedonia. After that from 2010 till 2013 he was teaching assistant at University Sent Paul the Apostle in Ohrid, teaching several subjects in the field of economy and applied mathematics. He started working in the consultancy business in 2007 as a freelance consultant for SME’s and NGO organizations. Till now he has lead and finished several projects on national and regional level.

Samoil has extensive experience in the field of financial management, management of SME’s, project management and strategic planning. 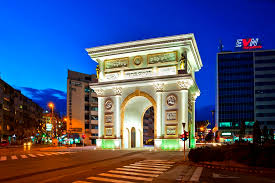 Driven by the favourable economic conditions, the overall demand for goods and services continued to increase throughout 2014 and was mostly satisfied by imports. Together with the rising international prices of key raw materials, electricity and food, this contributed to an overall increase in the trade balance deficit.

Macedonia has been a member of the World Trade Organization (WTO) since 4 April 2003.

In April 2001, Macedonia and the European Community and its Member States became signatories to the European Stabilization and Association Agreement effective from April 1st 2004 and the Interim Agreement on Trade and Trade Related Matters covering various trade components effective from June 1st 2001. In accordance with the Stabilization and Association Agreement, customs duties on industrial goods between Macedonia and the EU countries are in the process of being phased out. Currently, there is a wide asymmetric liberalization of EU imports of industrial goods of Macedonian origin which are duty-free. Relief for agricultural produce is also provided.

In March 2004, Macedonia submitted an official application for European Union membership. Having acquired EU membership candidate status in December 2005, the Republic of Macedonia embarked upon the key stages of European integration.

According to an Agreement signed on June 19th 2000 which entered into force on May 1st 2002, trade with EFTA countries (Iceland, Liechtenstein, Norway and Switzerland) enjoys preferential terms and conditions.

Macedonia became a CEFTA (Albania, Bosnia and Herzegovina, Moldova, Montenegro, Kosovo and Serbia) member in 2006. The trade component of this agreement came into force on July 26th 2007. In accordance with CEFTA, Macedonia began liberalizing trade in industrial and agricultural goods with CEFTA member countries

According to state authorities, gross foreign direct investment in the country for 2014 was around EUR 278 million compared to EUR 264 million in 2013 and EUR 117 million in 2012.

was established by Mr. Lars Johan Myrtroen in 1990 in Oslo, Norway and moved to London, UK in 1996 and provides Management Services to companies – complementing In-house Expertise.

We specialize in, Funding, Business Advice, Trading Platforms, Bank Instruments and Commodities.  We have been in involved in a number of very successful Start-ups in different industries and countries over a number of years.

On our web site, https://www.economic-consultants.com you will find comprehensive information in all of the sectors we are involved including a number of helpful Templates guiding you in the right direction when writing business plans, press releases etc.  Our extensive range of contacts and consultants reaches out to all corners of the world enabling us to develop links and partnerships that will assist in meeting goals and suggesting new areas to promote growth.

Our Funding Program enables clients to seek for funding from US$ 2 million and upwards.

Make sure you follow our News Letter and take part in our exiting development!

If you want to have printable versions of the complete Press Release please click and download below;