Putin and his regime once again demonstrate dictatorial behaviour!

When Putin last reinstated himself as President, he said that The West now should show Russia respect. He did not say why and I really wonder why!

The Russian feminist punk-rock band Pussy Riot from Moscow. stages politically provocative impromptu performances about Russian political life in unusual locations, such as on top of a trolleybus or on a scaffold in the Moscow Metro. 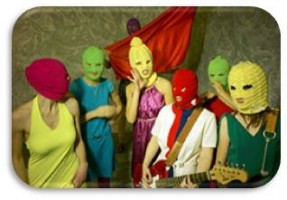 On February 21, 2012, four members of the group staged a performance on the soleas of Moscow’s Cathedral of Christ the Saviour, motivated by their opposition to the Russian President Vladimir Putin and the politics of the Russian Orthodox Church. Their actions were stopped by church security officials. On March 3, after a video of the performance appeared online, three of the group members were arrested and charged with hooliganism.

Their trial began in late July and raised much controversy in Russia and globally. On August 17, 2012, the three members were convicted of hooliganism (article 213.2 of the Criminal Code) motivated by religious hatred and each sentenced to two years imprisonment.

Russian world famous check genius Garry Kasparov, now an opposition political figure in Russia, was arrested during protests outside the Pussy Riot trial in Moscow yesterday and the Gay community must have felt like being put 100 years back in time – at least the ruling now is “No gay parades in Moscow for the next 100 years.

Turkey has made one important decision and stood by it; being a secular state. This creates respect and  should be an example to follow and hopefully in a couple of hundred years or so this is the only way.

However, very little seems to be adopted in Russia and the understanding of Human Rights seems to be close to zero – so respect; well once Putin and his hooligans start respecting Human Rights, may be the World will start showing them respect – as for now it is only disgust!