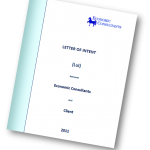 The Parties have decided to engage in discussions and negotiations concerning the participation in and development of mutual business.

This Letter of Intent (LoI), between [Economic Consultants (EC)] represented by Mr. Name and Client, represented by (Name) intends to constitute an agreement between the two parties.

It will give both parties the opportunity to start working immediately and the purpose is to establish a platform for negations of establishing an Agreement. If successful in the negotiations, this LoI will be replaced by a Letter of Understanding/Agreement.

Initially a one full day should be enough for an initial first meeting preferably in (Location), enabling the Client to give a full presentation on how everything organised and work. This meeting should take place in the near future and no later than (Date).

The Client offers EC to perform a Due Diligence on the Company and key Management as soon as practically possible. The process can be based on the written material given, interviews, and all relevant documents in Companies’ files.

(A general description ex.) Our intention is to find partners in Europe, preferably an industrial financially strong partner (or group).

The capital need is approximately €00 to 00 million for each set up in the countries mentioned.

It is EC intention as decided by the BoD to retain X% of the Company/or any JV.

This agreement is meant to last for a period of maximum 2 months and to be replaced by a Letter of Agreement (LOA) within the 2nd of said period.

If the decision is to establish a Joint Venture, and EC has received signed NDA’s, EC will submit a draft JV agreement which can act as a platform for negotiations.

We the undersigned agree to keep all matters confidential. A NDA will be issued and signed by the Parties immediately after this agreement has been approved and signed.

This Draft letter of Intent is not legally binding between the parties.