What is a Letter of Credit

Letters of credit are often used in international transactions to ensure that payment will be received. Due to the nature of international dealings including factors such as distance, differing laws in each country and difficulty in knowing each party personally, the use of letters of credit has become a very important aspect of international trade. The bank also acts on behalf of the buyer (holder of letter of credit) by ensuring that the supplier will not be paid until the bank receives a confirmation that the goods have been shipped

Definition of Letter of Credit

A letter from a bank guaranteeing that a buyer’s payment to a seller will be received on time and for the correct amount. In the event that the buyer is unable to make payment on the purchase, the bank will be required to cover the full or remaining amount of the purchase.

“Credit means any arrangement, however named or described, that is irrevocable and thereby constitutes a definite undertaking of the issuing bank to honour a complying presentation.” (UCP 600, article 2) 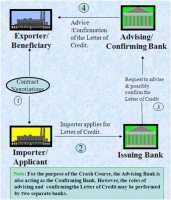 This letter of credit definition is taken from the UCP 600 (ICC Uniform Customs and Practice for Documentary Credits) which is the latest version of the rules published by ICC (International Chamber of Commerce ) regulating the letters of credit operations all around the world.

Role of the ICC and UCP in Letters of Credit

Sources for all Articles on the subject  are; ICC, Wikipedia, Investopedia and banks.