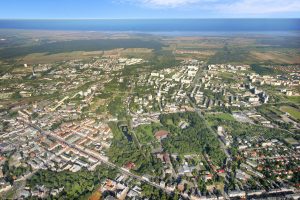 Koszalin on the Baltic Sea

Mr. Halys was born in Poland in 1958. He studied at the University of Gdansk – Faculty of Law, completed 1988. Application of legal completed 1993 – Attorney at Law. Additional education (already after the completion of university studies) in the framework of the foundation: Friedrich Ebert Foundation in Munich.

He gained the title of Legal Counsellor in 1990 after 25-years of practice, whereupon he started his own Legal Practice. Initially working with the processes of commercialization and privatization of state enterprises. He cooperated closely with at that time, Ministry of Ownership Transformation lead by Minister Janusz Lewandowski (currently EU Commissioner for Financial Programming and Budget). He was handling the privatisation process of a number of Polish companies, inter alia, KZNS Koszalin, FaMaRol Słupsk, Zakłady Metalowe BUMAR, PBE ELBUD Gdańsk or POLMO Łódź.

For more than 10 years he specialised in commercial and economic, corporate and real estate law with legal and investment advice for commercial projects. During this period, he established a close cooperation with companies and persons owing many attractive properties intended for a variety of commercial projects (commercial, logistics, housing, office and production functions).

Within the services offered he cooperated closely with partners who support the offer, possibilities and effectiveness. In this regard our offer is inter alia supplemented with the service of design and architectural work, planning of investments and commercialisation processes, real estate management or property protection.

Cooperating for many years with large domestic and foreign companies (e.g. STRABAG, HYDROBUDOWA, MOSTOSTAL, COLAS, RWE, WATENFALL, SAG GMBH, GTC, RODAMCO, ECHO INVESTMENT, AUCHAN, and LCP), they provided services for the projects carried out by these companies, including conducting proceedings aimed at obtaining public procurements for tenders for construction works.

For several years, he also provided consultancy services for waste disposal and management sector. He operates in the scope of implementation and promotion of investments on the basis of public and private partnership (PPP).

He is a Licensed Tax Advisor with the certificate issued by the Minister of Finance. In 1992 he completed the post-graduate degree in “Management of Small and Medium Enterprises”. In 2009 r. he participated training handling proceedings (as a legal representative) before the European Court of Human Rights in Strasbourg and he is registered on the list of lawyers recommended by the Helsinki Foundation for Human Rights.

His office has been operating independently since 1990. He has a system based on Partnership, cooperating with legal advisers and advocates in Poland and other countries and from 2004 also Germany, Ukraine and Canada.

Within the scope of its activities and provided services the Office is cooperating with public notary, real estate brokers, local and state authorities, military authorities in the field of real estate for sale, authorities of so called allotments – potential investment real estate, architects and designers offices, associations of experts in various sectors, companies involved in the commercialization of commercial space and its management, developer companies, installation and assembly companies, commercial chains and investment funds.